It’s 1817, and Betsy Bell (Rachel Hurd-Wood, Perfume: The Story of a Murderer) is a teenage girl who appears to be either possessed or haunted by an angry ghost who slaps her and pulls the blankets off of her bed, among other things. There are also weird noises and weird animals skulking about the family property. Betsy’s father John (Donald Sutherland) has angered Kate Batts (Gaye Brown, a renaissance woman whose credits include A Clockwork Orange, The Masque of the Red Death, and even a Transylvanian in The Rocky Horror Picture Show), a woman rumored to be a witch—is it possible she’s the one behind the phenomenon? John is also being affected—what is his role in the haunting?

The movie is based on a book written by Betsy’s future husband Richard (James D’Arcy, Hitchcock, Exorcist: The Beginning, The Hot Zone) which is supposedly a true story, but some say it’s a hoax. I read the book, and have difficulty buying that all that stuff actually happened. There are far more demonic happenings the filmmakers wisely left out, for example characters’ long conversations with the ghost about their personal lives. It’s basically a slightly friendlier version of Pazuzu in The Exorcist. Thankfully the movie pares down the creature’s dialogue, but the shots from the spirit’s point of view get old after a while. Wow, people really were easier to scare back then: 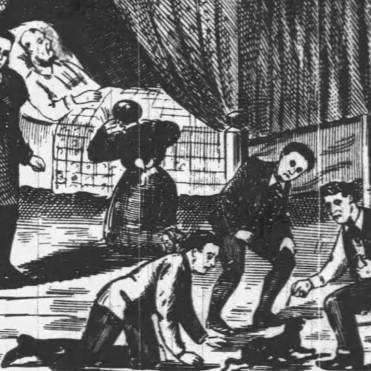 The issue of the family owning slaves is acknowledged fairly tastefully (as tastefully as such a subject can be). While the slave characters are superstitious and fearful stereotypes straight out of a 1930s movie, they are at least treated politely by the Bells. For example Betsy’s mother Lucy (Sissy Spacek) says, “Anky, could you answer the door, please?”

One aspect of the film I appreciate is that because Betsy is portrayed as a childlike and innocent girl, she’s not parading around in her frilly underthings like most teenage girls in horror movies. And because I don’t agree with Hollywood that romances have to be shoehorned into every single movie, I am also thankful that although the romantic subplot is necessary to move the film along, it is muted to a bearable amount (probably because the girl in question is a teenager, and her love interest is in his thirties).

The filmmakers decided to throw in a wraparound story of a teenage girl facing the same predicament as Betsy, which leads to a truly creepy ending. The rest of the film is hardly scary, but the shocking twist (for both girls) is grotesque and disturbing.

Check it out if you want a sincere tale with actors you’ve probably heard of.