About young Glen (Stephen Dorff) and his big sister Al (Christa Denton, The Bad Seed 1985), who are home alone for the weekend. With the help of their friend Terry (Louis Tripp, Gate II: The Trespassers), they accidentally turn a hole in the backyard into a portal to hell. Seems the combination of a geode, some blood (Glen cuts himself), levitation (fun at parties), a sacrifice (the family dog dies), and the accidental reading of a chant create a doorway for demons to mosey on out from hell and reclaim the earth. They have a good old-fashioned battle with the trio, destroying the house and yard in the process. Try explaining that mess to your parents, kids!

Even over multiple viewings, the characters take some getting used to before I settle in and start rooting for their success. Glen I find hard to take seriously because he’s a tiny Stephen Dorff. 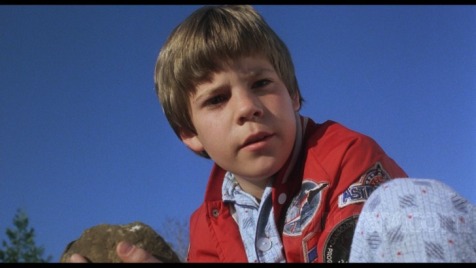 Terry is originally established as a creepy weirdo who thinks suffocating moths in a jar is “neat.” Al has the reprehensible habit of wearing ensembles like lavender pants, a green sweatshirt, and orange socks. However, Dorff out-acts the adults who are playing his parents (as do most of the young people in the movie), Terry turns out to be smart, funny, and sensitive when it’s called for, and Al…well, I like Al. Plus it’s refreshing that the young female lead in a horror movie keeps her clothes on for the entirety of the film. The rest of the teenybopper crowd is obnoxious and barely necessary to move the plot along, but at least they don’t get much screen time.

You can read The Gate in multiple ways. It could be a coming of age tale for Glen; he loses his tree house in the beginning and learns the harsh truths of growing up and losing bonds with his sister. Or you can read it as a cheap morality tale. Glen and Terry make the hole worse and start the whole portal-opening chain of events by digging for more geodes—they want to be rich. Then the chain of events is finished during a party, which Glen and Al promised their parents they wouldn’t have. Or you can just enjoy the ‘80s cheese, like awful special effects, a houseful of drunken, badly dressed teenagers partying and making witty statements like “Somebody get this dog a beer!” and even the old playing-the-record-backwards trick.

The film is not scary per se. The demons are mostly tiny rubber goblins with nubby tails—they’re pretty darn adorable.

Also, they’re not very good at their job. Their major strategy of attack is biting and tugging at clothes. Even when a giant demon shows up, it just stares at Glen, giving him plenty of time to decide how to kill it. There is also a good amount of humor in the movie, which I find well-done rather than annoying. The one-liners are even funny more often than not. However, there are some genuinely creepy moments, like the scene when Terry’s dead mom shows up. She talks really slowly about how she misses him, all the while building suspense, because we suspect that she’s going to turn into something horrible—and she does. There is also the scene when a family portrait turns into a bloody mess and shows the family being slaughtered. It’s entertaining and amusing; check it out if you’re a fan of Dorff or the decade.