Metal singer Eric (Brandon Lee) and his fiancée Shelly are brutally murdered in their home by a gang of thugs. But, as legend goes, “when someone dies a crow carries their soul to the land of the dead. But sometimes something so bad happens that a terrible sadness is carried with them and the soul can’t rest. Then sometimes—just sometimes—the crow can bring that soul back to put the wrong things right.” A year later one such crow brings Eric back from the grave, fresh as a daisy, to get revenge. But the dimwitted henchmen are only the start. Aided by police officer Albrecht (Ernie Hudson), he sets out to take down Top Dollar (Michael Wincott), the man who ordered the murders. 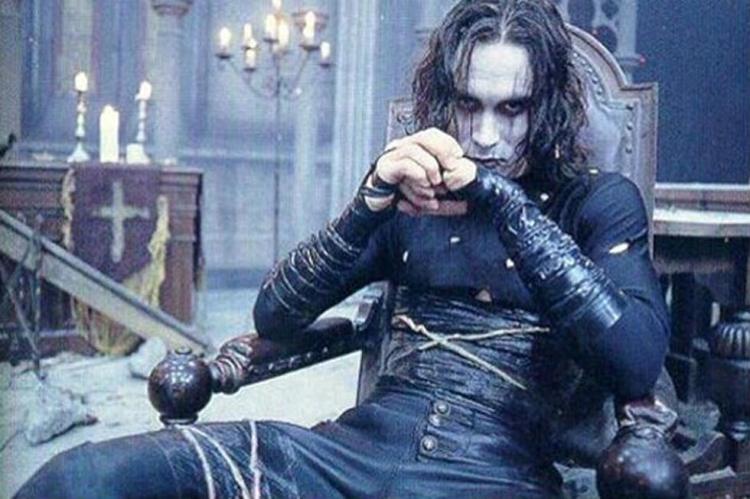 The Crow is famous for Brandon Lee dying while filming. Somehow the filmmakers seamlessly finished it without him (though there are some scenes when Eric stands in his old apartment and plays guitar that look suspiciously like filler material). More important to me in the film is the beautiful cinematography, great soundtrack, and solid writing (it was penned by David J. Schow and horror writer John Shirley).

Pretty much my only gripe with the movie is that of the four minor-league thugs working for Top Dollar that Eric kills, the Black guy dies first—cliché! Of the four, he was also the most interesting–he was Knife-throwing Guy while the others were Likes Cars Guy, Junkie Guy, and Nothing to Distinguish Him Guy. I am a little puzzled by some of the language used in the movie; it’s rated R, but characters still say things like “ass-head” and “What the crap?” (A warning: no matter how many times G4 airs it, don’t watch this on T.V.; phrases like “I feel like a little worm on a big fucking hook” turn into “big fishing hook”).

On the whole, it’s accessible to different crowds. For action fans, it stars Bruce Lee’s son and has lots of fight scenes, one-liners (tolerable ones), and explosions. For horror fans, there’s a dark tone, gory murders, Tony Todd, and Ling Bai. I recommend it especially to newly hatched emo kids–start here, and learn much.