Parody of Dracula movies by way of Mel Brooks. It has the same basic plot as Dracula (mixing aspects of Tod Browning’s 1931 version and Francis Ford Coppola’s 1992 version): Count Dracula (Leslie Nielsen) makes a living (undeading?) drinking blood and corrupting repressed virgins until he crosses the wrong people, namely Dr. Seward (Harvey Korman), his son-in-law Jonathan (Steven Weber), and his buddy Van Helsing (Brooks). They set out to trap Dracula before he turns Seward’s daughter Mina (Amy Yasbeck) into a creature of the night. 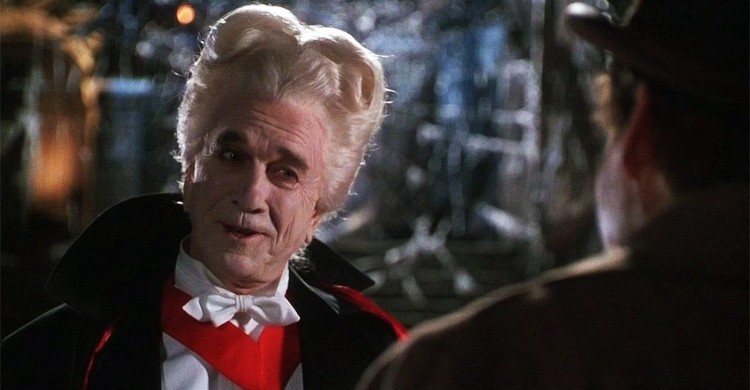 Since it’s a spoof, there are lots of homages to the aforementioned Dracula movies, and many of them are funny. I like how Dracula wears the goofy pompadour Gary Oldman has in Bram Stoker’s Dracula—as a hat. Great performances abound, my favorite being Peter MacNichol as Dracula’s witless assistant Renfield, channeling Dwight Frye from Browning’s Dracula. 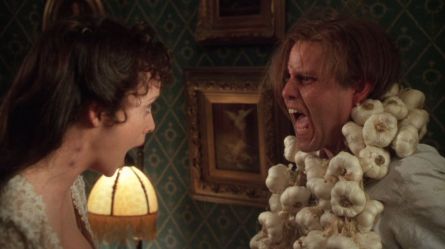 I find the sophisticated humor just as amusing than the slapstick, case in point the first scene featuring Dracula. He enters gracefully, referring to the bats flying around, “Children of the night. What a mess they make.” It’s a slightly reconfigured bit of dialogue from Browning’s film. When he subsequently slips in bat poo and falls down a flight of stairs, it’s almost as funny–that’s the magic of Leslie Nielsen. The physical humor can get a bit tiresome, but I enjoy the scene when Mina and her maid Essie (Megan Cavanagh), both under hypnosis and being given commands by Dracula, trip over the furniture and bump into each other:

Having seen the movie in the theatre and umpteen times since, I’m more than familiar with the jokes, but I still laugh a time or two. So if you’re not offended by multiple jokes about Victorian English sensibilities by an almost exclusively American cast, give this one a look.