The film picks up moments after the first one ends. Mary Beth, faced with Victor Crowley, escapes by poking him in the eye Three Stooges style and runs away. She teams up with Reverend Zombie, her uncle Bob, Shawn’s twin brother Justin, and a group of hunters and fishermen to return to Honey Island Swamp and get revenge on Crowley. In typical slasher movie fashion they split up and wander the woods like dumbasses until they get picked off. Can they kill an unkillable ghost?

I read on IMDB that most of the crew from the first movie returns for the sequel, which is awesome. Much of the cast returns as well, like Kane Hodder (who is also the stunt coordinator) as Crowley, Tony Todd as Zombie, Parry Shen as the twin brother of the character he played in the original, Mercedes McNab as Misty and Joleigh Fioravanti as Jenna (in footage form), and even John Carl Buechler as Jack Cracker (AKA the guy who drinks pee). Of course there is a new Mary Beth, but seasoned scream queen Danielle Harris is more than able to fill Tamara Feldman’s shoes. Also added to the cast is mumblecore regular A.J. Bowen and director Tom Holland as Uncle Bob. 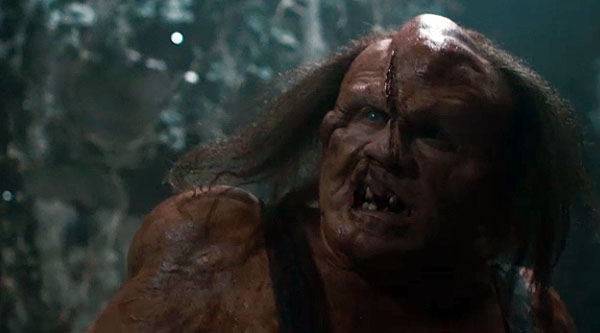 Since it’s a sequel, of course the gore ante is upped. This time there’s even more fake blood, and the killings are gooier than ever. For example, there is a man strangled with his own intestines, a jawbone ripped out, a face removed by boat propeller, a chainsaw to the groin, a belt sander to the back of the head, and a torso ripped out of its skin. However, the movie is otherwise a bit slow-paced (but not boring), and the murders don’t begin in earnest until over halfway into the movie. As with the original, the violence is offset with humor. I was amused by some of the reactions to Crowley; Bob puts up his fists like they’re going to box, and Zombie tries to choke him.

As per usual for a sequel, the monster is given more of a back-story. It turns out that Crowley’s father had an affair with his dying wife’s nurse. The wife cursed the resulting pregnancy, causing Crowley’s deformities. What makes this really worth noting is that Crowley’s mother was Black, making him the first biracial slasher movie villain. As for the other characters, some are likable or at least interesting, such as Mary Beth and the enigmatic Zombie, but the group of victims-in-waiting are quite unremarkable. There’s Cleatus the redneck (Ed Ackerman), John the guy who never says anything (Rick McCallum), Trent the biker-looking guy (R.A. Mihailoff), Chad the camouflage guy (David Foy), former-couple-getting-back-together-in-the-scenic-wonderland-of-the-swamp Layton (Bowen) and Avery (Alexis Kendra), and Vernon (Colton Dunn) the seriously obnoxious guy. 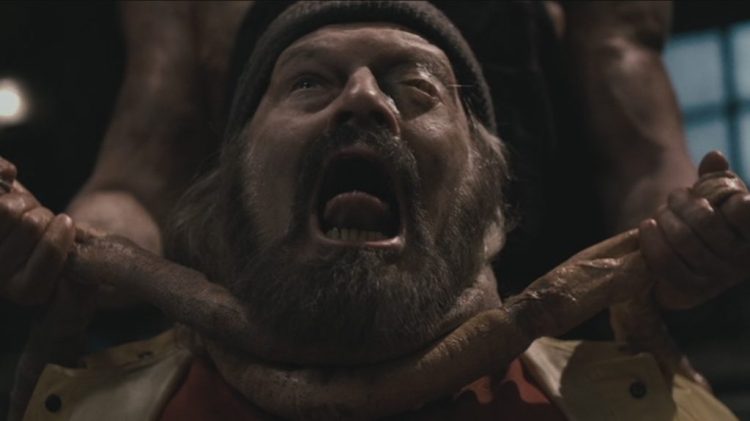 The first time I watched the movie, I was unimpressed. But this time around, I enjoyed it much more. Check it out if you’re in the mood for bloody slasher movie action.