Malaria is a simple country, where the people are poor and sell evil inventions to support themselves. It’s populated mainly by mad scientists and their assistants, called Igors, who are second-class citizens. One particular Igor (John Cusack) is our protagonist. When his master Dr. Glickenstein (John Cleese) dies unexpectedly, he sees his chance to pursue his own research for creating life. He and his pals Brain (Sean Hayes), an ironically not-so-bright brain in a jar and Scamper (Steve Buscemi), an immortal bunny with a death wish create monster Eva (Molly Shannon). Unfortunately for Igor, Eva is kind and gentle, and not likely to win the evil science fair. An attempt to brainwash her only inspires her to become an actress. Igor’s rival Dr. Schadenfreude (Eddie Izzard) steals Eva for himself, prompting Igor and friends to rescue her. 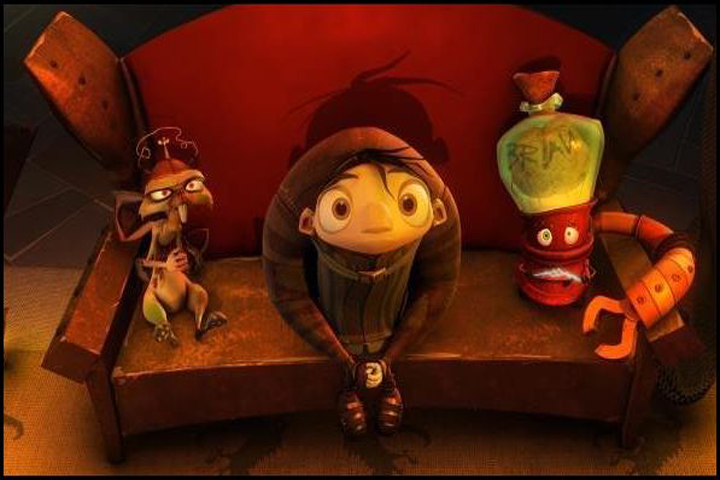 As with any movie—even a children’s movie—there are aspects that may be too much for young viewers. Dr. Glickenstein’s death is off-screen, but his severed arm is brandished in more than one scene. Parents may also be off put by the suicidal Scamper. One character is an invisible man who refuses to wear pants. There is a euphemistic reference to bathroom functions, and Scamper speculates Eva may be having a “woman problem.” There’s also the mistreatment and abuse of Igors, culminating in their being recycled for parts.

Warnings aside, there is plenty to like from a parental standpoint, for instance the theme of always being yourself and the underdog overcoming adversity. It also dispatches with the typical notions of beauty that are generally shoved down kids’ throats. Our protagonists are a buggy-eyed hunchback and a giant misshapen monster—and they are wonderful. The two characters that approach traditional beauty—Schadenfreude and his girlfriend—are evil and shallow.

I also enjoy the offbeat humor in the movie, like Igor having a “Yes Masters” degree. I also like the scene when Igor chases Brain with an axe, and Brain shouts, “This is why people are afraid of hunchbacks!” Basically my only gripe is towards the end, when people uncharacteristically and abruptly respect the Igors. If you’re in the mood for gallows humor and PG action, give this one a look.