Brought to you by the Troma Team. Richard (Donald Grant) is an obituary writer for a local newspaper. He has a chance to move up in the world when a rash of murders spreads, leaving victims dead in their closets. With the help of college biology teacher Diane (Denise DuBarry), her genius son Professor (a teeny-tiny Paul Walker), Diane’s mentor Dr. Pennyworth (Henry Gibson), priest Martin (Howard Duff), and military man General Turnbull (Donald Moffat), they discover the killer is a big brown lumpy monster. The gang must destroy it before it kills again.

It’s meant to be a horror/comedy genre-crosser. It does have its amusing moments. I enjoy the scene when suspense is played for laughs: a woman is being snuck up on in the shower Psycho-style—but it’s only her husband, who keeps bothering her. The title cards are kinda funny; my favorite being “Three fifteen-ish.” Also funny—in a bittersweet way, now that he has died—is watching Paul Walker as Professor play against the kind of roles he was known for.

I can’t really say there are any actual scary moments. I can recall watching the first few minutes as a kid and being too scared to watch the rest, but there is nothing particularly eerie to me now. The monster is clearly made of rubber—it seems to be a callback to old sci-fi movies, as the film directly references The Thing from Outer Space. It even includes the typical ’50s triangle between the monster, science, and the military—science fails, of course.

One interesting aspect of the film is its possible interpretation of a gay subtext. The monster itself is almost certainly gay, or at least in love with Richard—it gives him the same wistful doe-eyed look Diane does, then carries him off. The movie posters, which scream “It’s out! It’s out! It’s out!” would seem to agree with me. The film could be seen as a neat allegory with the monster representing homophobia and self-hating gay people: the only way to destroy it (after science, religion, and the military fail) is to destroy all closets. Sure, the heterosexual couple save the day, but they at least challenge gender role stereotypes. Richard is the sassy reporter, while Diane is the brains, and her son is the less-than-overly-masculine genius. 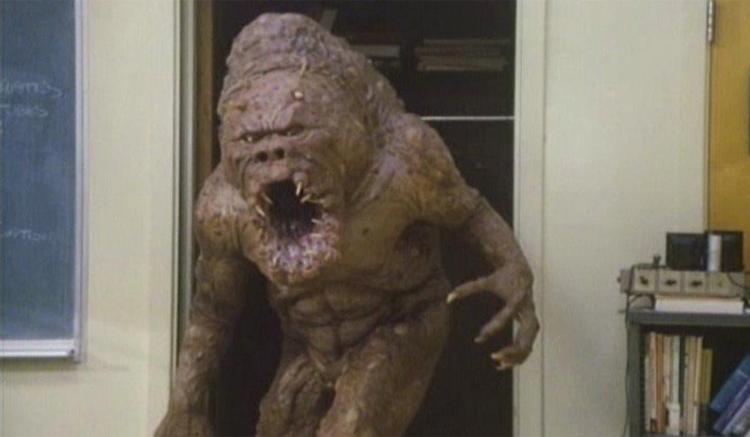 Or you can interpret the monster as a grotesque caricature of gay dudes, with that gaping mouth and six-pack. I’m also disturbed that he looks an awful lot like poo.

All in all, it’s entertaining, sometimes funny, and delightfully campy. Give it a look if you’re in the mood to turn off your brain. Watch for a very young Fergie as a meal for the monster—she’s Fergalicious, indeed.