Written and directed by Clive Barker, adapted from his story. Boone (Craig Sheffer) is a seemingly nice guy who during a therapy session with his psychiatrist Dr. Decker (David Cronenberg) finds out that while under hypnosis he confessed to killing fifteen people. Boone flees to the mythical town of Midian, where the monsters live and all sins are forgiven. The tribe of shape-shifters there realizes he’s innocent and turns him away. Decker betrays him (being the killer himself), resulting in Boone being shot to death. He is then accepted to Midian, but again finds trouble when his (very human and innocent) girlfriend Lori (Anne Bobby) comes looking for him. Meanwhile Decker is hunting for Midian, and getting local law enforcement involved. It culminates in a battle royale between the Nightbreed, the cops, and a priest. 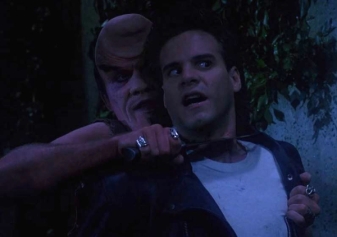 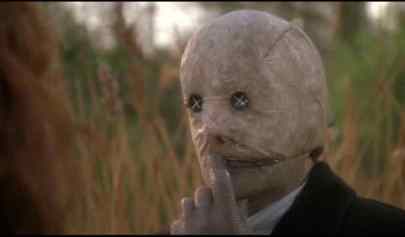 The performances are amazing. As per usual for early ‘90s movies, the makeup is awesome, but the puppetry and special effects are less than spectacular.

There’s also one set that’s clearly a painting. I remarked to my sister Leslie, who was watching it with me at the time, that they seemed to have spent most of their budget on Cronenberg. She joked that Doug Bradley must have worked for Cheetos.

Horror lovers be warned: despite the high amount of gore, it’s not strictly a horror movie. However, it is well worth the watch. Cronenberg gives a pretty creepy performance—he’s not a bad little actor. Hellraiser fans should be happy, given that the movie features Doug Bradley (Pinhead), Simon Bamford (Butterball Cenobite), and Nicholas Vince (Chatterer Cenobite) as Nightbreed. Look at this gorgeous shot composition! And the lighting is exquisite! 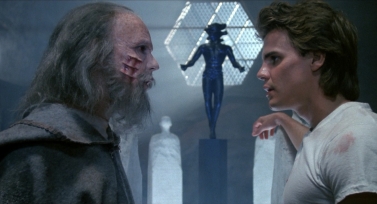 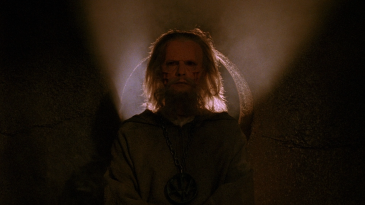 Fans of Barker in general will recognize and be pleased with his strong sympathy for the monsters rather than the normal folk, who are all villains, from Decker to the corrupt cops and the loony priest. The moral seems to be, to quote Leslie, “Idiots shouldn’t breed, and monsters should.”