Cornelia (Agnes Moorehead) is a mystery writer living with her maid Lizzie (Lenita Lane). The two are menaced by what appears to be the killer known as The Bat. Unbeknownst to Cornelia there is a large sum of money hidden in her house, and the killer is now coming after it. 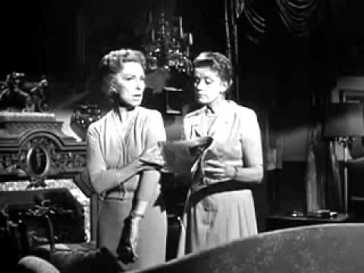 Lizzie: His specialty seems to be killing women, my goodness, two of them in one night, all his victims died the same way, like their throats had been ripped open with steel claws.

Cornelia: That’s charming. I’ll have to try it some time. In a book.

The aspect of the film that sticks out the most to me is that Cornelia can be construed as gay. Lizzie has been her maid for twenty years, and is fiercely protective of her. The two of them are both childless, nor is there any mention of men in their lives. If Lizzie is only Cornelia’s maid, why do they spend so much time together (honestly, who brings their maid to the bank with them?), why is she never seen doing maid-ly duties, and why does Cornelia also have a housekeeper? There’s no real love interest presented to the ladies, except possibly Malcolm (Vincent Price), though he may be off the market too—our first glimpse of Malcolm shows him alone in the woods with another man while wearing an apron.

Interestingly, both Moorehead and Price were widely suspected of being queer in real life. Gay, heterosexual, or whatever, Cornelia (and to a lesser extent Lizzie) is a tough, brave, resourceful woman. When she realizes The Bat is in her house, she calmly sets booby traps, letting the guy know “I have a gun and I know how to use it.” She’s ultimately saved by a man, but he’s her butler. She’s all you could ask for and more in a 1959 heroine.

Overall, it’s entertaining and not too melodramatic for the ‘50s. Give it a look if you’re in the mood for the era when a woman slept in a twin bed dressed in a nightgown and high heels. Fix your peepers on this and you’ll have it made in the shade.