The film picks up a while after the first one left off (being made four years after the original). The Freelings (JoBeth Williams, Craig T. Nelson, Heather O’Rourke, and Oliver Robins return as Diane, Steve, Carol Anne, and Robbie, respectively) are poor and living with Diane’s mother (Geraldine Fitzgerald), who promptly dies. Meanwhile, Tangina (Zelda Rubinstein) and her friend Taylor (Will Sampson) are digging under the Cuesta Verde house. Sensing danger, they seek out the Freelings. Turns out Carol Anne’s ghostly harasser has found her and wants her back.

Two of my criteria for a good sequel are met off the bat. Too bad Tobe Hooper didn’t direct again, but (unlike the third movie in the series) the main cast returns, aside from Dominique Dunne as the oldest child Dana, seeing as she passed away shortly after making the original film, and the movie follows the storyline. My third criterion—that the logic of the original is upheld—is kinda iffy. The ghost of the first movie is given a name, a face, and a back-story. That’s fine—it’s his creepy habit of keeping people in a cave against their will

that makes the movie effective and develops the plot. (Though it does raise the question of why there’s a different mass grave under the Cuesta Verde house.) But banishing him is another kettle of fish; in a particularly sappy turn, this time all of the family members have to venture into ghostie-space to fight the villain with their love. The special effects are terrible to boot, adding insult to injury.

This movie is nowhere near as scary as the first, but it has its creepy moments. The scene when Robby is attacked by his own braces is a bit silly yet still gets to me after the twenty or so years since I saw this movie first. There is an interesting theme of struggling to keep the family together despite financial woes and Steven’s self esteem issues, though it does get heavy-handed at times. I love the return of E. Buzz, who has to be the livin’est dog in horror movie history.

On the plus side, the acting is still great, the plot otherwise makes sense, and the conceptual design is by H.R. Giger—he makes a vomit creature look good. 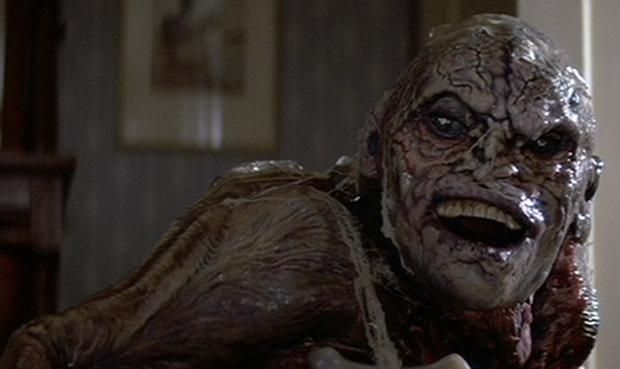