Brandon (John Dall) and Phillip (Farley Granger) kill their acquaintance David (Dick Hogan) because they want to test their theory that “Moral concepts of right and wrong don’t hold for the intellectually superior.” Phillip immediately regrets it, while Brandon is “tremendously exhilarated” (that’s ‘40s talk for orgasmic). They then proceed to throw the body in a trunk and have a dinner party, inviting David’s father (Cedric Hardwicke), aunt (Constance Collier), and girlfriend Janet (Joan Chandler). Things are going swell until their sharp-eyed college mentor Rupert (Jimmy Stewart) suspects they’re up to something, and they have to scramble to keep their secret. 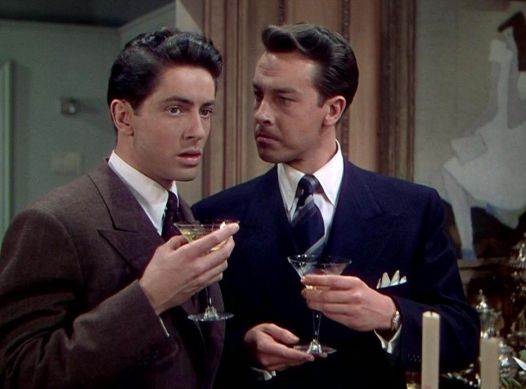 Speaking of secrets, this film is notorious for Brandon and Phillip being lovers—subtextually. They live together, they’re often standing shoulder to shoulder, and they’re wont to say things like, “It’s such good crystal and I hate to break up the set.” Then there is dialogue like “Brandon would sit up ’till all hours at the master’s feet.” Not to mention Phillip’s drunken nelly hissy fits. Arthur Laurents, who wrote the screenplay, was dating Farley Granger at the time.

The first time I watched the film I came away feeling the message was that heterosexuality triumphs over the nancy boy deviants. However, this time I noticed that Rupert could also be construed as gay; he’s described as “a little peculiar,” there’s no talk of a female love interest for him, he wears no wedding ring, and though he flirts with the maid, it’s clearly in jest (she’s frumpy). (In the original source material the movie was adapted from, Rupert was a much younger guy who definitely did mess around with dudes.) Also, Phillip lights a cigarette for him, which, as I learned in film class, is a sexual act in movies. Plus these are pretty suggestive:

Moving along, it’s based on a play and still has the feel of one; it’s heavily driven by dialogue, and there are few camera cuts—it’s mostly one continuous shot. I myself don’t mind, as I like plays, and I’m impressed by the work it must have taken to implement that technique. The acting and script are decent (until the end, when it becomes extremely melodramatic), and the plot is pretty original. And Janet is always a delight.

One thought on “Alfred Hitchcock’s ‘Rope’: Murder! Wit! More Gay Coloring than You Can Shake a Stick at! (review)”