2006 prequel to The Texas Chainsaw Massacre, opening in 1939 with the birth of little Tommy (AKA Leatherface), appropriately enough in a meat-packing plant. He’s promptly thrown in a dumpster and found by Luda Mae Hewitt (Marietta Marich); he’s then raised by Luda Mae and her husband Charlie (R. Lee Ermey). Thirty years later, brothers Eric (Matt Bomer) and Dean (Taylor Handley) with their girlfriends Chrissie (Jordana Brewster) and Bailey (Diora Baird) are on their way to enlist in the Army. Needless to say, they get stuck being dinner guests of a little Texas family instead.

Though predictably enough the film is extremely violent, there are quite a few moments that are played for laughs, some of which I actually found funny. Like Charlie parading around in the top half of a stolen sheriff’s uniform and boxers; Luda Mae says, “You really think you’re something in that outfit, don’t ya? Here’s your pants.” Then there’s the scene when they’re having people for dinner; Luda Mae drops a hand on the floor and says, “Don’t step on my fingers.”

I once read an analysis of The Texas Chainsaw Massacre (in the amazing book The Naked and the Undead: Evil and the Appeal of Horror by Cynthia Freeland—it’s out of print, but can still be found online to buy, hint hint) that relates it to the Vietnam War. This film takes that interpretation and runs with it, with multiple references to said war and movies about it. R. Lee Ermey is most famous for his role as a cruel drill sergeant in Full Metal Jacket.

There are also visual allusions to Apocalypse Now: one with Dean lying on a hotel bed under a spinning ceiling fan, and one of Eric’s head slowly rising from a pool. It gives the movie a bit of depth, saving it from being entirely gore for gore’s sake, as seen by such events as an exploding cow and a character getting caught in a bear trap. 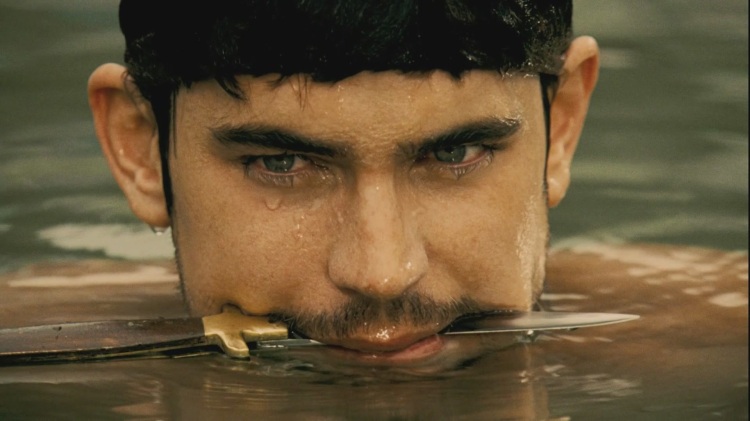 An interesting thing about the movie is that it draws my sympathies to the Hewitt family rather than its victims. Dean is a coward, letting Eric take the fall for burning his draft card; Eric, actually re-enlisting, is way too excited to get back to Vietnam and kill people. Chrissy and Bailey are personality-deficient and seem to exist just as sex symbols. They’re all spoiled brats compared to the profoundly poor Hewitts; Luda Mae finds Tommy in the dumpster while looking for something to eat. Also, she and Charlie love Tommy; Charlie defends him, calling him “misunderstood.” Then again, Charlie is very cruel, even to his own family; he manipulates Tommy into doing his bidding, whether it’s kill innocent people or chop off Uncle Monty’s leg for no reason. However, I adore Ermey, so I’m still kind of on Charlie’s side. I’m not big on prequels, but it’s produced by Tobe Hooper and co-written by David J. Schow. Check it out if you want a brutal modern take on TCM.