Julia (Laura Regan) is a psychology student working through childhood memories of night terrors. Her friend Billy (Jon Abrahams), who had a similar issue, kills himself in front of her, claiming the monsters they dreamed about have come back to get him. She becomes acquainted with Billy’s friends Terry (Dagmara Dominczyk) and Sam (Ethan Embry); together they conclude that Billy wasn’t delusional, and that the creatures marked them in childhood in order to capture and eat them later. Julia is left trying to unmark herself and escape, but she’s faced with a series of rolling blackouts.

All of the boogie-critter movies I’ve watched lately have been fairly similar in plot: light-avoiding childhood monsters return to plague adults. They is one of the higher-quality ones. It has a bit of depth and takes itself seriously. Also in its favor is the often hit-or-miss tactic of not immediately showing the monster, making the audience use its imagination—here, it works. The glimpses we get of They show them as completely CGI, but they’re satisfying anyway, as they’re only glimpses—we don’t have time to see how fake they look. (Take notes, Boogeyman.) 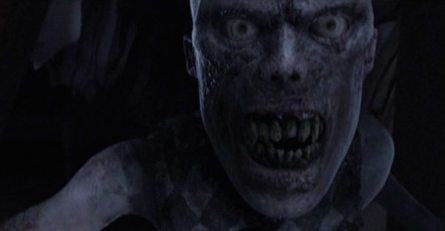 I read that there were an unusual amount of writers (thank you, IMDB), which would explain why Julia pulls out the thing that marked her, but the monsters are still able to track her down. Despite that, the writing is surprisingly solid and even somewhat original. The acting is decent, the characters are unspectacular but likable, the plot is fairly original for the sub-genre, and it’s clean of one-liners. (Though there is the question of why the monsters don’t just eat them as children, and Billy’s eye color change from childhood to adulthood.)

I saw this in the theatre with my friend Stacy, and when I got home my house was deserted and completely dark. After a ribbing from Stacy, I hurried up the driveway and quickly turned on a few lights. Give it a look if you’re a boogie-fan looking for a scare or two. Check out the trailer for a teeny-tiny Alexander Gould as Young Billy.