Due to an incident of snobbery in high school, five friends: Paige the sexy one (Denise Richards), Kate the popular one (Marley Shelton), Shelley the brainy one (Katherine Heigl), Lily the fun one (Jessica Cauffiel), and Dorothy the fat one (Jessica Capshaw) (Dorothy’s adjectives, not mine) are being stalked and killed by a psycho in a Cupid mask. Apparently Jeremy, the well-meaning but off-putting boy they all refused to dance with at the prom, is harboring a grudge, exacerbated by the fact that one of the girls lied and said he attacked her, leading to his subsequent stints in reform school, juvenile hall, and a mental hospital. Or is it someone else committing the murders, like Kate’s creepy neighbor, or Kate’s creepy boyfriend Adam (David Boreanaz), or the creepy detective investigating Shelley’s death, or one of many random creepy guys the ladies encounter? 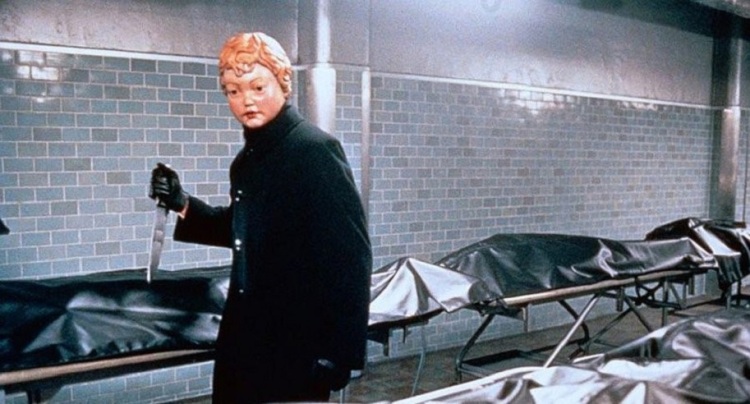 Valentine was not well received by critics, and I can see why. It’s needlessly violent, with random people being killed for seemingly no reason—for example, why kill Dorothy’s maid? Obnoxious characters pop up just begging to be offed. Then there’s the question of whether or not being a jerk in high school justifies being slaughtered in adulthood. Furthermore, there are plot holes like how Shelley, hiding from the killer, is able to zip up a body bag from the inside. In addition, it resembles many other slashers in that it features a masked villain killing on the anniversary of a holiday when something pissed him off. Lastly, all the female leads are stuck-up and nigh intolerable. The male characters are little better; they’re all either sleazy or stabby.

Despite its weak points, the film also has things to say, like suggesting that no one can escape his or her past. The killer is the most obvious case, being so stuck in the past that he’s murdering people that embarrassed him, but the main characters are still living out the roles that were assigned to them in high school. Then there is an interesting take on the dating world: it sucks for women. The main characters are all perpetually looking for a good boyfriend, and there seems to be none; Shelley goes on a date with an egomaniac who talks about himself in the third person, Adam is an alcoholic, Paige’s date only wants one thing, Dorothy’s boyfriend is out for her money, and Lily’s boyfriend tries to engage her in a three-way without her permission. The ladies also try video dating and speed-dating, and still come up empty-handed. The message seems to be that it’s dangerous to trust a strange man. In one scene, the ladies attend a Valentine’s Day art gallery showing that symbolizes the dating scene for them: the women are separated and led into a hall of televisions showing leering eyes, with a creepy dismembered voice saying, “Love me.” 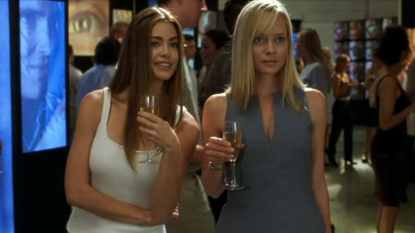 I do like the eerie Cupid mask and the wacky valentines each woman gets: “Roses are red/Violets are blue/They’ll need dental records to identify you!” The trivia on IMDB includes some neat ideas about foreshadowing–but they’re spoilers, so be warned. I think it’s worth at least a look—check it out if you wish Carrie had been a guy, had no telekinetic powers, and waited a really long time to get revenge. At least watch the trailer, it’s probably better than the movie.