Documentary/found footage style movie about Brandon (Carson Underwood), a film student making a YouTube feature about four acquaintances using a Ouija board. They are his film school buddy Shay (Belmarie Huynh), her boyfriend Calvin (Eric Window), Calvin’s sister La’Nette (Swisyzinna), and the siblings’ friend Michael (Justin Armstrong). After the group has a few too many reckless sessions with the board, they open a portal to let ghosts out, with less than happy results. 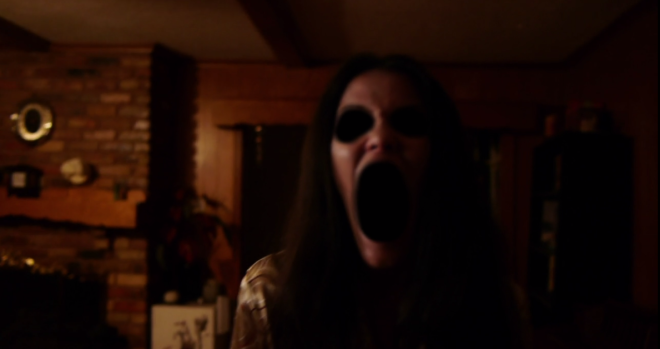 The most striking thing about the movie is the boring and endless character antics not involving the Ouija board. Calvin is a stereotypical Black guy, philandering with the honeys and quick to anger. He cheats on Shay, which takes up way too much screen time. The movie’s about two-thirds over by the time the ghosts make an appearance besides off screen growling or giggling. The scene that explains why the ghosts are so pissed is blessedly objectively filmed, and is a breath of fresh air from the self-involved millennials and their narcissistic camera obsession.

The acting is acceptable, especially for such a low-budget movie. The cast is refreshingly diverse: Black and Asian as well as white—though the two white guys look way too much alike. Even the ghosts are Latina.

Cliches abound, like characters saying “Stop goofing around. This isn’t funny,” and “I’ll be right back.” I had to laugh when La’Nette sees a ghost; she yells “Hell, no!” and slams the door on it. La’Nette, easily the most likable character, is a bit stereotypical as the sassy Black girl (think Brenda in Scary Movie), but not as painfully so as Calvin. As could be expected, there are face-palmingly stupid moments, like when Michael wanders up to his attic and conveniently finds newspaper articles telling the story behind the ghosts. Has he never been in his attic before? Though if he’s squatting, that would explain why a guy who doesn’t appear to have a job has such a spacious house. Or the scene when La’Nettte, intent on burning the Ouija board in the fireplace, stops to ask “Do I just throw it in?” And my least favorite, everyone says “wee-jee”–if you’re going to blatantly steal from Witchboard, at least take away the correct pronunciation of the word Ouija.