Becca and Tyler are two teens whose mother (Kathryn Hahn) has shipped them off to stay with her estranged parents for a week. Nana and Pop Pop seem nice enough, but their behavior soon turns odd. Pop Pop is paranoid and quick to anger, while Nana tends to crawl on all fours, laugh hysterically at nothing, and strip down to claw at the wall. With no phone service and their mom on a cruise, the kids are left to face the odd ducks alone.

It’s one of M. Night Shyamalan’s better efforts. I spent maybe half the movie giggling and talking shit, as opposed to just about the whole running time of Lady in the Water. I liked the allusions to “Hansel and  Gretel.” The whole witch fattening up the kids is used cleverly; Nana is constantly baking and offering the kids food—every other scene they’re eating. Best of all is the creepy scene when Nana says to Becca, “Would you mind getting inside the oven to clean it?” We all know Becca’s not going to get cooked, but still. Then the motif is suddenly abandoned, which was disappointing. A couple of scenes were genuinely shocking. Overall, Shyamalan does a good job of building and maintaining tension.

Of course I have gripes. Tyler is an obnoxious little shit. His rapping (which he’s undeservedly smug about) is agony, particularly his final one. He did grow on me after a while, though, I have to admit. Becca is a pretentious auteur but pretty tolerable. The performances are more than satisfactory. Olivia DeJonge and Ed Oxenbould do a great job as the kids. Peter McRobbie as Pop Pop is eerie, and Deanna Dunagan as Nana is downright scary.

One of my bigger complaints is that Tyler is established as being afraid of germs, but only when it’s convenient to the plot. There’s a scene when he handles a shit-filled diaper with nary a twitch, but later he flips out when he has to flush a toilet without a tissue to wipe his hands on. I’ve been changing loaded diapers for the better part of seven years, and let me tell you—a toilet flush is nothing compared to touching a poo-poo diaper. 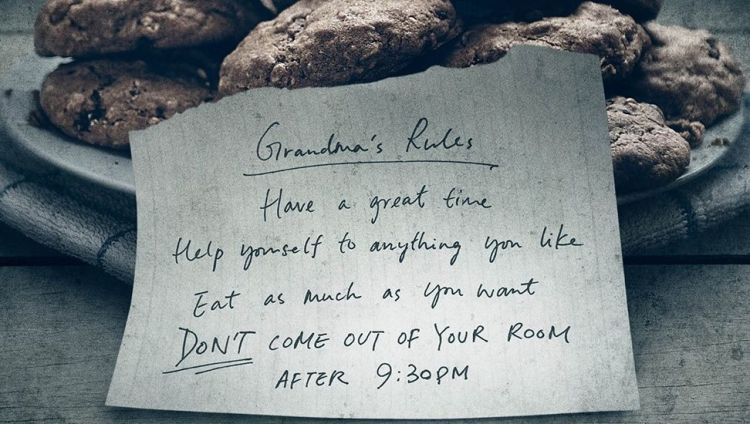 Give it a look if you’re in the mood for something creepy but kinda fun.