The original Child’s Play was released in 1988, and concerned a serial killer named Chucky (Brad Dourif) who, with his dying breath, transfers his soul to a mass-produced doll. He then torments his six-year-old owner, Andy. The reboot, 21 years later, features a disgruntled Vietnamese sweat shop employee (still less racist than the voodoo practice in the original) who cancels the doll’s safety protocols and “violence inhibitors.” The doll is then gifted to thirteen-year-old Andy (Gabriel Bateman, Annabelle, Lights Out), who at first scoffs at Chucky, but then, ET-style, red hoodie and all, learns to love the creature who’s so like and yet unlike him. Until Chucky gets jealous and stabby. Just like ET.

The most obvious aspect of the movie is its modernization, making it a cautionary tale about technology running away with us. Chucky is a Buddi doll, part of a conglomerate of smart devices made by the Kaslan corporation. The Buddis are marketed to kids as toys, but they’re really for the parents. The dolls keep the kids company (in one commercial, a Buddi sits in a baby’s crib singing a lullaby) to the extent that Mom and Dad are released from spending time with their offspring at all. In addition, the Buddi is shown reminding a mom of an upcoming event and ordering a self-driving car to pick her up. Andy’s mom Karen (Aubrey Plaza) begs him to go play outside rather than play on his phone: “Look, two kids standing in the rain. That looks like fun.” And of course, the two kids are looking at a phone. In one scene, a character is pulverized while his daughters sit playing on their phones, totally oblivious. And there’s the invasive nature of cameras and recording devices, as shown by Chucky monitoring people, and the creepy guy who spies on tenants in the apartment building Andy and Karen live in–with Kaslan cameras, naturally. Andy’s friend Falyn freaks out upon her first view of Chucky, immediately predicting a robot apocalypse.

And of course the other elephant in the room: the new voice of Chucky. Tom Holland, who was a big driving force behind the original, called the hiring of Mark Hamill a smart choice. I agree. I think the attempted reboot of A Nightmare on Elm Street crashed and burned because Jackie Earle Haley was a fairly unknown actor at the time. If they’d hired someone popular, say Matt Damon, people might have given a shit. (Ha ha, made you imagine Matt Damon as Freddy!) I wasn’t excited about the idea of a reboot, but with Hamill onboard I was willing to give it a try. I fucking hate Star Wars (come at me), but I loved some Batman: The Animated Series growing up, and Hamill as the voice of The Joker was my childhood.

As for Chucky’s personality, the filmmakers take a different approach. Hamill’s Chucky is more childlike. His model is glitchy, and Andy has to teach him everything from scratch. In a dig at the issue of whether simulated violence influences people, Chucky learns to maim (and spout one-liners) while watching The Texas Chainsaw Massacre 2. He hurts others in a misguided attempt to make Andy happy, and later to keep Andy all to himself.

This one is a bit more diverse than the original. Plaza is mixed-race, plus we have Brian Tyree Henry taking over for Chris Sarandon as Detective Mike. Carlease Burke (Incarnate, Freddy’s Dead: The Final Nightmare) plays his adorable mother Doreen, who lives in the apartment complex. Everyone in the building seems to be straddling the poverty line, including a moderately colorful group of teens whom Andy befriends. For once, characters live in a realistic setting; usually anyone in a movie, regardless of their economic standing, lives in an immaculate two-story. Also interesting is that Andy has a hearing aid. It’s not essential to the plot, making him seem like just a differently-abled person, who are rare as unicorns in movies–actually, more rare. Generally any movie character who has any kind of disability is only that way to further the storyline along somehow, not to represent how people are in reality. (Another exception is in Curse of Chucky; the protagonist is in a wheelchair without it being a major plot device–a coincidence, though, because Don Mancini, creator of the Brad Dourif Chucky series, wanted nothing to do with this reboot). 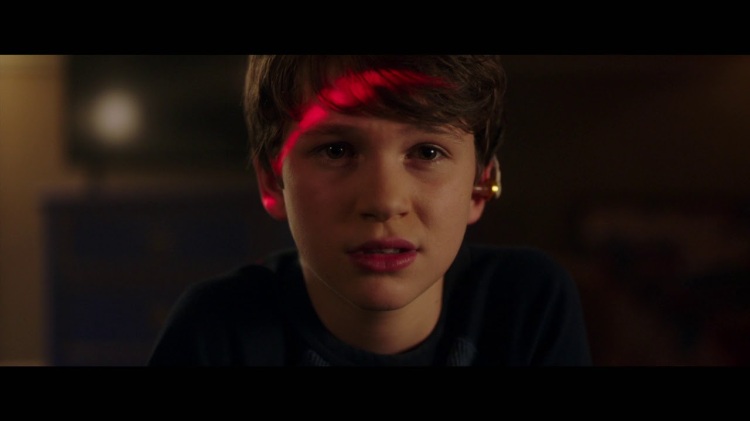 The characters are pretty appealing. Mike is kind and really tries to make a difference in the world around him. Andy is funny (my favorite quote is from Andy to Chucky: “Just close your eyes and pretend to be less creepy”) and a lot less whiny than the typical movie teenager, as are his friends. Karen is quirky and interesting. She’s dedicated to her son, but not so much so that she eclipses her own personhood. She does have crappy taste in men; her boyfriend, Shane, is not only married, but shoves Andy down in a fit of pique. Confusingly, he starts out as a nice enough guy; we’re supposed to dislike him, but the first scene he’s in, he, with mild irritation, tells Andy to be quiet because Karen has fallen asleep on the couch. A short time later, he tells Karen, who has baked cookies, that he’s not really hungry. That monster!

Overall, I grudgingly enjoyed it. It’s not at all scary, but it did manage to shock me a time or two, which is almost as good. Give it a look if you’re in the mood for something that lambastes our wasteful, technology-dependent, consumerist society. Or if you wanna watch a doll destroy everything in his immediate vicinity. Who says we can’t have both?