*Sniff* My very, very first movie review. Not to be confused with the 1986 American movie of the same name; this is a Japanese movie from 1977. It revolves around seven schoolgirls (who sometimes dress like Sailor Moon) off to spend their summer at a secluded house in the country. There’s Gorgeous (obsessed with her looks), Fantasy (over-imaginative), Mac (hungry—her nickname is short for stomach), Sweet (likes to clean and be helpful), Kung Fu (likes to kick things), Melody (plays the piano), and Prof (brainy and wears glasses). Jinkies! The gang has a mystery on their hands when they start disappearing and dying off. Could it be that Gorgeous’s friendly (yet sinister) auntie is behind it? *Note: some of the translations of names and events differ for this movie.

Since the film was made in the 1970s, one can expect a certain degree of awfulness, and this one is no exception. The special effects are terrible and the sets are clearly paintings. Good thing this is a horror comedy. Despite the serious subject matter (such as Auntie’s husband dying in World War II and multiple on-screen killings) there are quite a few funny moments.

For example, the girls’s hapless teacher Mr. Togo falls down a flight of stairs and gets a bucket stuck to his butt; while he’s calling the girls to say why he’s going to miss their train, a kid is standing behind him hitting the bucket with drumsticks. Which leads to my next observation: the wackiness. Much of the comic relief comes from the flat-out weirdness of what’s happening. Death comes in the form of random inanimate objects coming to life and pummeling people. One of my favorite scenes is when Gorgeous finds Mac’s severed head, which promptly bites Gorgeous on the ass, exclaiming, “Tasty!”

I spent much of the movie feeling confused, yet amused. It took me a while to figure out the parody aspect; “Cheesy!!!” my notes exclaim. Eventually I settled in, and was glad I took the ride. It’s hilarious and completely unpredictable. I recommend it to anyone who’s sick of formulaic slasher movies and Scooby Doo fans who wish that for once the gang would find a real ghost. 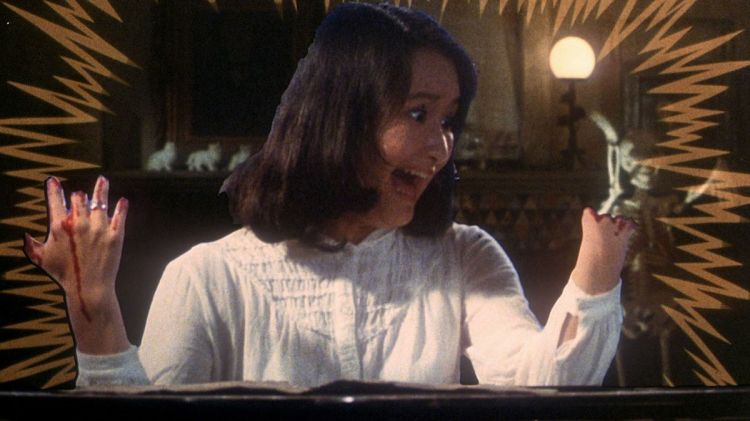