Danny (Dylan McKnight) is a sad sack who’s moping over his girlfriend leaving him. He cheers up in a hurry when, while visiting a friend in drug rehab, he spies Laura (Cherilyn Wilson), a traditionally attractive girl with Sleeping Beauty Syndrome. This is characterized by her sleeping most of the time and having nightmares, though nothing is physically wrong with her. Danny is also introduced to Byron Volpe (Patrick Kilpatrick), an evil genius who can hypnotize people with his eyes—and who has claimed Laura for his own. Danny breaks Laura out and takes her home with him, but Volpe won’t let her go that easily. 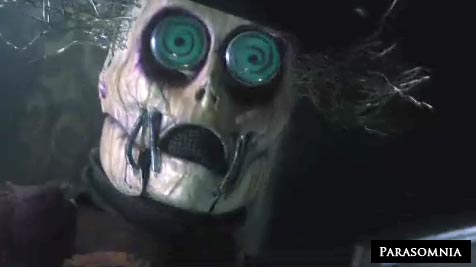 Like with any William Malone movie, I have multiple gripes, most of which concern Laura. She’s supposedly “perfect” and “pure,” but seeing as she spends a good deal of time asleep, what’s so great about her? When she does wake up, she has less personality and mental capacity than a Cocker Spaniel–you know what, I’m just insulting dogs here–she’s dumb, is what I’m saying. Danny is driving her home from the hospital, and she demands “Out!” of the car. She rubs her face in the grass and (I kid you not) chews on a squeaky toy. She later progresses (regresses?) to baby status; Danny has to bathe and dress her and feed her by hand. Danny seems to have no motivation to be involved with her other than that he’s lonely and physically attracted to her. Possessed by Volpe, he tells Laura, “You were just a stupid doll that I could dress up.” Volpe’s words, but true nonetheless.

I feel an animosity towards Parasomnia that I don’t have for Feardotcom or House on Haunted Hill. My notes about Danny read: “I wanna smash his stupid face.” Maybe it’s because normally I can blame script issues on someone else, but Malone actually has writing credit on this one. He also uses less seasoned actors than usual, and Dylan McKnight as Danny leaves something to be desired, particularly when Danny is supposed to look scared and instead looks mildly surprised. My other big pet peeve is the predatory lesbian character who gets hacked up by a possessed Laura, presumably because she requested that Danny share her.

At least there are less plot holes than usual for a Malone film, the major one being the remarkably incompetent security guard at the hospital, who lets Danny take Laura without checking whether he’s actually a doctor. There is also a somewhat eerie scene when Volpe lets loose a series of weird clockwork creations, accompanied musically by two goggled cello players. The film is meant to be surreal and odd like a dream, but that can only stretch so far. Though the movie is occasionally creepy and somewhat original, it’s not even as good as FeardotCom. If you’re in the mood for something hallucinatory and infuriating, give this one a look.