John Carpenter’s remake of 1951’s The Thing from Another World. A group of people at the National Science Institute Station in Antarctica are menaced by a shape shifting alien that can pass itself off as a myriad of seemingly harmless things, from a dog to a fellow colleague. Since the being could rapidly infect the whole world, the crew are hard-pressed to tell who’s been infected and who hasn’t, leading to a hostile atmosphere as they battle aliens and each other.

I’ve seen The Thing twice now, and still find it hard to follow. I have no idea who these people are or why they’re in Antarctica. Also, the cast is comprised mostly of a multitude of white guys; they don’t look alike, but their names aren’t used often and they don’t do much to stand out. If I had to describe the cast, I would say there’s leader Mac (Kurt Russell), badass Childs, my favorite (Keith David), nutcase Blair (Wilford Brimley), and Bald Guy Who Got Shot, Dog Guy, Sassy Cook (T.K. Carter), Sunglasses Guy, and Autopsy Guy. (I find it highly ironic that the cast is all men, since even the 1950s version had a female scientist.) But as gripes go, these are small, and don’t spoil the movie for me. 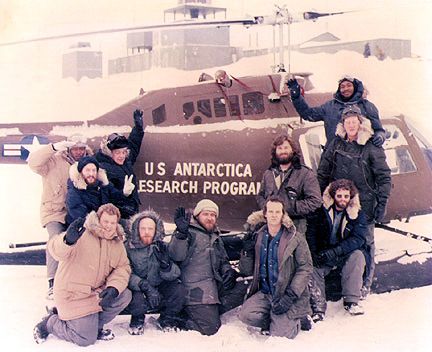 For 1982, the special effects are great—mostly because they involve explosions and gooey aliens, which aren‘t computer-generated. The blood and guts are quite realistic; thus the movie is often plain disgusting, what with guys’ bodies regularly splitting open and such. There’s even a convincing severed head, which is hard to come by in any time period.

A scene when Mac ties up the crew members suspected of being aliens and tests their blood (causing the alien among them to reveal itself in gruesome fashion) made #48 on Bravo’s 100 Scariest Movie Moments. It’s a fairly effective scene, but for me the most eerie is earlier in the film, when Mac, also accused of being an alien, is threatening to blow up the base because they won’t let him inside; meanwhile, one of the crew is applying a defibrillator to an ailing team member, when…dun dun dun! The tension is focused so much on Mac that the background happenings are truly shocking. (If you do watch the movie, forget I said anything.) While it’s more gory than scary, the film manages to cultivate a creepy sense of paranoia, as nobody can trust each other. Most human-to-alien conversions are off-screen, so we don’t know who’s what either.

There is very little humor and only a few one-liners for a movie with one foot in the action genre, most notably Mac’s “Fuck you, too!” Its tone is dark, but it manages to keep from being depressing.  And thanks to Family Guy and his own lousy commercials, I can’t take Brimley seriously. When he warns, “Watch Clark. And watch him close,” I couldn’t help but chuckle, thinking of “Check your blood sugar. Check it often.”  Check it out if you’re in the mood for hostile, slimy aliens—and check it out often.