Remakes of episodes of The Twilight Zone, organized into four stories. Segment 1 involves angry, racist white man Bill (Vic Morrow) being suddenly transported back in time; he finds himself in the shoes of oppressed members of society, namely a Jewish man in Nazi Germany, a Black man being hunted by the KKK, and a Vietnamese man during the Vietnam War (ironically being brought down by a multi-racial group of soldiers). Segment 2 takes place at a rest home, where Mr. Bloom (Scatman Crothers) shows the elderly residents that a game of Kick the Can will restore them to their childhood—though not without consequences. Segment 3 revisits one of the show’s most famous episodes, with Helen (Kathleen Quinlan) meeting a young boy named Anthony who manipulates his family with his ability to wish for (and receive) often horrible things. Segment 4, also based on a famous episode, has John (John Lithgow), an airplane passenger deathly afraid of flying, battling with a monster on the wing of the plane.

Fans of the show may be either disappointed or delighted with this film. Segment 3 especially changes a lot of its source material; I feel the changes are interesting, but on the other hand the notion of one child controlling an entire town is scarier than just controlling his family. But I think overall the film, after all made twenty-some years after the show premiered, keeps the spirit of The Twilight Zone, at least in the sense of characters experiencing weird situations with a wacky twist at the end.

I could do without Segment 2; I enjoy Scatman Crothers, and the child actors playing elderly people suddenly regaining their youth are charming, but the cutesy-poo, lighthearted tone throws off the whole movie, which is darker and somewhat more cynical. Not that the movie is overly scary. There are some eerie moments, like Anthony’s sister being punished by having her mouth removed from her face, but on the whole it’s ironic that the film, made in 1983, tries to modernize the show, but is ridiculously dated and corny itself.

However, what bothers me most about the film is the scene in Segment 4 when John shatters his window with a gun to get at the monster—does airplane glass break that easily? One would think the courts would be inundated by lawsuits of passengers being continually sucked out of airplane windows.

The film can at least boast that it’s written in part by Richard Matheson (Segments 3 and 4), who wrote for the original show, including the episode remade in Segment 4 (thank you, IMDB). It’s also directed by masters of the horror genre, including John Landis (Segment 1), Steven Spielberg (Segment 2), and Joe Dante (Segment 3). Maybe it’s adolescent nostalgia talking, but despite my complaints I have a great deal of affection for the movie, from its serious and effective scenes to its goofy cornball parts. 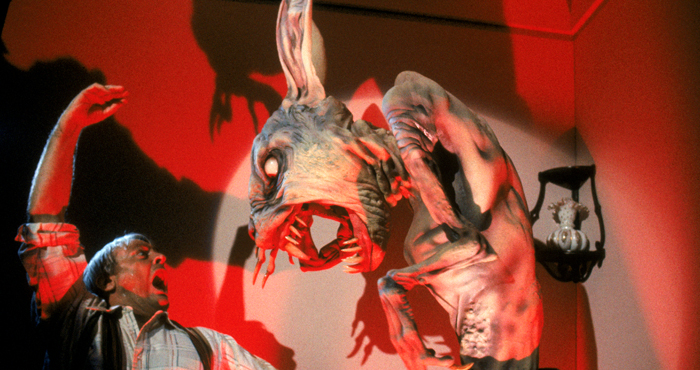